Staff member
Xmas present for myself this year. M.40 Heer NS 64 D172 named to "Obk. Frankenberger." "F.P.Nr. 10076 B" . Obk. = Oberkanonier, which was roughly equivalent to a private first class in an artillery unit for US troops at the time. That Feldpostnummer, 10076 B , was for the 7 Batterie Stellungs-Werfer-Regiment 101, a heavy nebelwerfer (rocket launching) mobile / mechanized unit which fought from June 6, 1944 on D-Day until it was destroyed by 4th Infantry Div. and 101st Airborne troops in the fight to Cherbourg from Utah Beach. It is unusual to find items tied to nebelwerfer units, particularly attached to the Normandy fighting.

Staff member
This unit was largely equipped with captured UE French tracked carriers (like a Bren carrier) with a four rocket rack for the 28/32 cm Nebelwerfer 41 launcher system.

Staff member
7 Batterie Stellungs-Werfer-Regiment 101 ( schw.Stell.-Werf.Rgt. 101 ) was attached to the 709th Infanterie-Div. firing on Utah Beach troops and in support of the defensive fighting in the hedgerows. Interestingly, I have another helmet identified to the 709th Inf.-Div., a Feldwebel with the 739th Gren. Regt. It shows some of the same type of age and wear, namely indications that it sat outside and got wet before being souvenired:

A helmet in a French collection from the same unit was found outside of Cherbourg and the manner of naming in the skirt is identical. Note that the shell wear / age looks similar as well. I think these helmets were in piles outside in the weather from the German troops who surrendered at Cherbourg and were souvenired later by US troops associated with the buildup in the area. 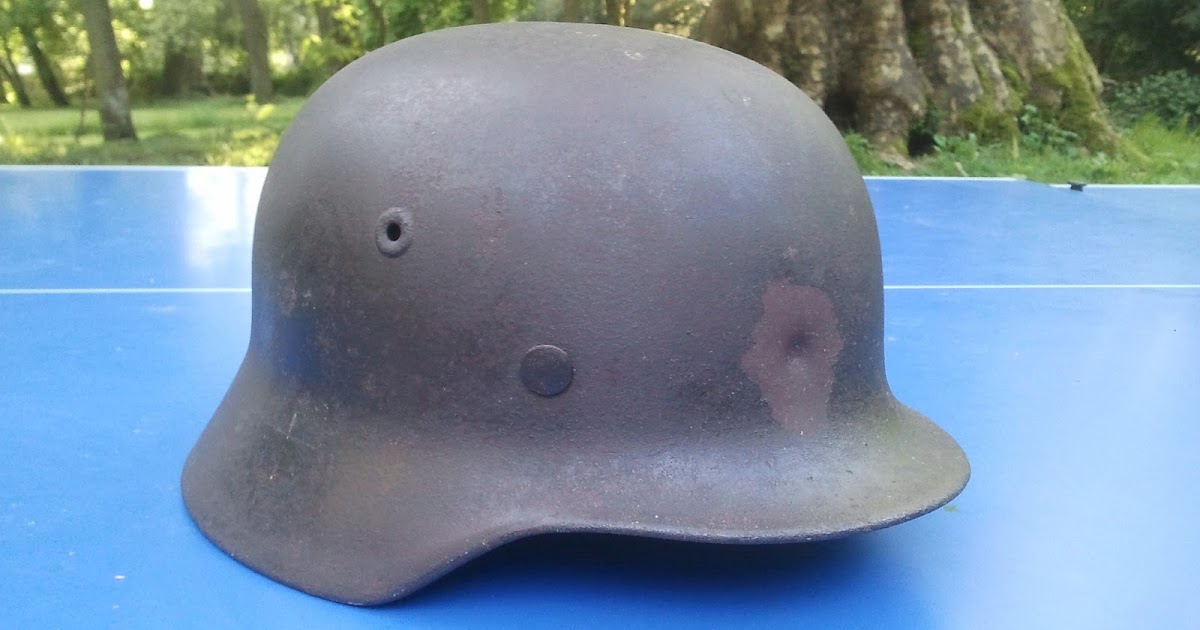 Staff member
7 Batterie Stellungs-Werfer-Regiment 101 evidently caused problems for the US 4th ID and 101st Airborne during hedgerow fighting breaking out of the Utah beachhead. By August 1944, schw.Stell.-Werf.Rgt. 101 was completely destroyed and stricken from the German fighting unit rolls.

Wow! How cool is that piece? Congratulations and Merry Christmas!

Staff member
That is a fantastic helmet!! Great research too. Amazing piece.

Awesome Xmas gift. Congratulations and you deserve it!!

Staff member
So it was Christmas in December and not in August!

Great helmet Hambone.
Santa came through for me too and he saved the best for last.

Very nice helmet Craig with lots of history too.

Captivating. Thanks for sharing.

I noticed a strong similarity of these markings to those found on a pair of helmets sold by Ken N. about 4 years ago back in 2017.

Staff member
Looks like the M.35 from the 739 Gren. Regt. as well. I think that these were perhaps done by unit supply. If they are humped I don't know how a relic version would show up in France. Also, I paid about the same for this as the going rate for a regular M.40 H SD helmet. I would have fluffed up the ad with unit information, like I've done here. I've got several exact pair "twins" of camo helmets as well. I think this unit largely surrendered together at Cherbourg. After their rockets were gone that was that. I think these helmets ended up all congregated in an area where they surrendered and were subsequently souvenired by supply troops, all of whom would have been at the port of Cherbourg and area running supplies from Britain to the troops fighting inland.

This is a fairly unique pair of helmets. They were not brought to the US by a single veteran but were sourced by me in two different places some two years apart from each other. (One came from North Carolina and the other from South dakota.) They are both Ckl64 helmet shells. They are both M42 single decal army helmets with 95% paint and 95% decal. Liner s are original, intact and sound. Chinstraps are original; one is marked and the other is not. Both have a name and feldpost number hand painted at the rear skirt. The feldpost number is from a mortar unit which was attached to the Cherbourg defenses in the spring of 1944. Although there is no information on the veteran (s) who brought these helmets home in 1945, it is pretty safe to assume that they were captured at the time that Cherbourg fell to the US VII corps (composed of the US 4th, 9th and 79th infantry divisions). One helmet belonged to a gefreiter and the other to an oberleutnant (who may indeed have been the company commander). The fact that they have been re-united here is by virtue of a remarkable coincidence. Individually, they are wonderful examples of completely honest combat helmets. Together, they make a display which is nothing less than extraordinary. Price for the pair is $4000.00

What did SD Heer M42s sell for back in 2017 in that condition; about $1500 apiece ? So with the feld post information (.10 worth of white paint) the price has gone up $1,000. Don't tell me there are not smart people in this hobby.
We have two German helmets that were in the same place during WWII find their way to the states via 2 different vets, and then have them find their way to the same dealer some 70+ years later from two different states, and have those period feldpost facts verified by the handwritten information is incredible by itself. But then to realize that the two inscriptions were likely painted by the same person (same fonts/penmanship/style/spacing/etc..) 70+ years ago is beyond incredible. WOW !!!

But now we have TWO MORE helmets with the EXACT SAME feldpost information as the first two, and also it appears that the information was also penned by the SAME PERSON as the first two ---- well, it is really a stretch to ask me to accept these inscriptions as genuine. These FOUR helmets exist in the realm of the fantastic, the highly unlikely, IMO. Such things almost never happen in the real world. Yet they happen in today's collecting world more often than you would think.

And as with the sham-pain ruined SS helmets, there appears to be no verifiable vet provenance with any of them.

Would not a more credible explanation be that someone here in the states has been painting these up in recent years which are being "found" by the pickers of well known dealers ?

Staff member
Well, I paid the same for mine as I sold my last M.40 single decal Heer that was unnamed, which was in about 10% better condition. The comparable to mine that I posted next to it for comparison is a relic shell that a French collector sourced in France and searched the FPN on. Go look at the link. The info for the $4k pair sold on the FPN is wrong, it’s not a mortar unit. If you were going to hump FPNs in a skirt there are sexier units, and why not pick some KIAs traceable to field graves too. Did someone hump up this relic shell in France as well?

As for the likelihood of finding two identical German helmets from the same unit brought home by two different vets years apart, here are two that I found like that, and I’ve run across the same situation several more times in collecting:

The helmet without the label is direct vet bringback from a combat engineer in the 99th Inf. Div. The one with the label was mailed home by Pvt. Louis Waldron of Co. E, 413th Regt., 104th Inf. Div. ("Timberwolves"). His company commander won the Medal of Honor. Both are Luftwaffe, both named...

I think the writing in the skirts is indeed similar, and in exactly the same information pattern, but so is mine from another 709th Div. unit, the 739 Gren. Regt. feldwebel helmet. I paid less for it than the same helmet with no such information in the skirt. This unit was all bagged in Cherbourg together. They were static defense troops stationed in Normandy at least a year before the invasion. Was their identifying info and FPN information all done by the same field level supply person(s) responsible for issuing gear? In any event, if you look closely, the manner of putting the information in the skirts is the same, white paint, same general Germanic style, same F.P.Nr. abbreviation and number, military prescribed uniformity, but the “handwriting” to me is clearly from different people.

Was the humper copying the French relic helmet skirt info and getting the unit wrong on the sales pitch for the M42 “twins”? If mine was humped why wouldn’t it have sold for a bit more than a standard M40 Heer? Again, why not hump better units? If someone tells me the unit they’d like I can easily provide that FPN and probably a KIA name and rank that matches sufficiently. No need to copy misidentified FPNs.

Staff member
First, it isn’t difficult to write a name and unit in a helmet or on another piece of equipment, turning an anonymous piece into a re-searchable object with minimal effort, one step more then the lazy way of just rambling off a name like: this is the helmet of Lt X of unit Y, we all know that.
Doing this has become a whole lot easier since we have a world of knowledge at the tip of our fingers, finding a cool name that matches to a sexy unit isn’t that difficult for those that want to put in a bit of effort in their fakery, you don’t even need to read a book or visit an archive anymore to do it.
This being said, in the case of the Frankenberg helmet (Hambone collection) we can compare it with the Kaminski helmet, a relic helmet found in France prior to May 2013.
- Hambone have you contacted the owner of that helmet to ask how and where he found it? His email address is prominently visible on his blog, I guess he doesn't mind being contacted.
This also can be said of the Gefreiter Boethling helmet, the letters “G” & “f” are exactly the same.
Both helmets show signs of wear we can expect to see, pitting,...etc.
There sure are unit helmets, helmets with identical camo paint for example, the famous FJR6 M38 sand camo’s souvenired in Normandy by members of the 101st Airborne Division.
Now the Olt Janke helmet, the lettering looks indeed identical but there is no wear.
Possible? Perhaps but we all know the reputation of Ken N, has he put his “artist” to work to make a pair of helmets to sell a rather dull M42 for more money?
SV 44 holds in a way the key to this mystery, if he would share the information on where his relic helmet was found we would know a whole lot more because I seriously doubt that Ken N would go to the trouble of having a relic helmet upgraded with a name and Fp number to sell on some French flea market.

Staff member
Peter, I’ll shoot him an email and invite him here to provide info on the source of his helmet. Again, it’s not like the world of FPNs is so limited that one knocking them off could not pick the unit, that they would need to copy something they saw. FPN marked helmets are not rare, I have a number of them. Did they see the Kaminski relic helmet in France and copy it? Frankenberger was faked to look like Kaminski and then sold without reference to the unit history for about the same price as without the unit information? It’s good that M45 raises this issue. I recall seeing those two Ken N helmets and wondering why they were $4k.
You must log in or register to reply here.
Share:
Facebook Twitter Reddit Pinterest Tumblr WhatsApp Email Share Link