Just curious has anyone here paid over $500 for a regular WW2 MP44 magazine - ?
(I own about a dozen mags and haven't, guess I have been lucky, I'm not particularly discerning or a particularly capable collector, either.)

They are not rare on auction or forum classifieds (easy to find in Europe, even England, and Germany), really only desirable if you own an MP44 (though I am sure a few collectors in non-gun countries require one or two in their collection.) and although I am not sure what the numbers are in circulation, there must be an enormous amount out there, as several manufacturers got in on the action in WW2 and just from what I have personally owned, seen and handled I would guess the surplus number of mags in the tens of thousands.
This may upset a few people, but even the MKB42 - MP43 markings aren't rare - in fact they're almost as easy to locate as the FXO MP44 mags, and turn up all the time. In the last few years folks have decided to add an $700+ price tag to them -

The prices being asked seem to be a case of a small number of collectors "jacking" themselves - please excuse the poor use of that term, but it describes it well, IMO.

I know the replica magazines never quite got it right, certainly the two I have had were rotten, one doesn't fit the well, the other doesn't cycle well - I know there was a big surge in the price of the MP44 parts kits, based on folks buying them for instead of a 401K type investment. I know Brad Pitt used an MP44 in Fury. I know a transferable MP44 is $15K and up, so the chaps requiring spare mags for shooting guns are universally a little wealthier than average, so fleecing them a little might seem sporting enough, though once they have enough mags the buyers are gone again.
But when something is in such abundant supply, it still doesn't quite explain the price surge.

I probably have enough mags for my two MP44's and don't really need more, so it's not even from a frustrated buyer angle, but, it is interesting to me how the dollar numbers in collecting shift.

Anyway, thoughts and comments - thought it might be an interesting discussion really.

*The curious thing to me is that my two most reliable mags, the two that just don't cause issues with my rifle are the two 1001 Post-war German mags.

Some of my beat up old work-horses - these work for their living, so pristine finish isn't a deciding factor. 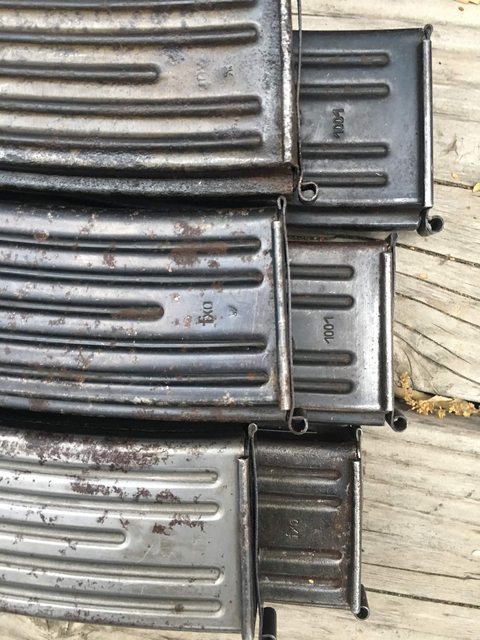 As with anything, people will try to get as much as possible, and if other people are paying...what can you do?

Even stupider in my book is G43 prices, and even more...Jap MG mag prices!!!! Its crazy!

pzjgr said:
As with anything, people will try to get as much as possible, and if other people are paying...what can you do?

Even stupider in my book is G43 prices, and even more...Jap MG mag prices!!!! Its crazy!
Click to expand...

You don’t want to know what I just paid for a VGC+ condition 99 mag and pouch. My ass still hurts

Bigdibbs88 said:
You don’t want to know what I just paid for a VGC+ condition 99 mag and pouch. My ass still hurts

Did you get it from my buddy? I know how crazy they are cause he told me at the SOS!
S

Most I’ve ever paid was $330 a mag for 6 mags in factory grease with the provenance to prove it. Anyways I wouldn’t pay more than that as I have over these years hit over a dozen.

I would never pay more than $ 300.00 a mag maybe a hair more with shipping. I place wants ads on 10 different gun sites and always get a guy here and there, who has one in their collection. they always ask if I want to make a offer, I start out around $ 200 if in ex /good condition. I see these guys buying mags for $ 500 plus fools and their money all so they can join the Club. I have several mags that were dug up in eastern Europe after a good cleaning they work great and make great range mags I paid less tha $ 100 for them

I personally do not own a EG 1001 and would love too, as I m a EG firearms collector, eg workmanship is second to none. but certainly not worth $500

I also I have a good supply of mag parts ( sold at RTG) at times I am offered mags shells or mags that do not function well. I picked up 2 mag shells from Poland a few years back they fit and function fine now.

Impulse buying seems to be another factor like these mags are rare, its the opposite they are plentiful. The impulse buyer only know GB or Flea bay, we have a few "neckbeards" to use a term borrowed for ar-15, selling mags here for those insane prices.

I am a capitalist, so it what the market will bear, but I prefer to buy under the fake price lines established by Fleabay & GB

I haven't bought any in the past couple of years but have spent $200-$300 each for the last several I bought. Mine are in pristine shape. I concur, these are not rare, rather plentiful. No way I would go $500+ seen lately. Everything seems to be double or more the true value. Impatient buyers keep driving up the prices, and it is a seller's market right now.

I couldn’t agree more that reckless buyers have caused mag prices to skyrocket far beyond actual value. I could use a few MP44 mags myself but I certainly won’t pay $500 for even one. I can see $200-300 but not $500. Seems like Luger snail drums are in the save boat with G43 and SVT mags right there as well. Funny how MP40 mags are high but not insane.

For that matter the entire Mp44 market is distorted. $40-50k for one is essentially unobtainable for the average collector.
W

I have to admit, I'm one of the people who have overpaid for MP44 accessories. From the time I was a kid, the MP44 was the most neato rifle I could imagine and I dreamed of owning one. Now that I'm older, I am blessed that I have enough disposable income to realize that dream so I have, on some occasions, overpaid to get what I want. Fortunately for me, the BD44 scratches the itch so I haven't had to spend the resources required to buy an original. I figure that gives me enough left over to buys some nice extra goodies, even if some of them have been a bit overpriced.

Only one original for me and that is a KUR marked plus BNZ bolt and op rod for $300... I missed out on a few for 369 each recently so bargains, not including the IMA 6@400 deal are still out there.

Bigdibbs88 said:
You don’t want to know what I just paid for a VGC+ condition 99 mag and pouch. My ass still hurts

But those are actually rare, I paid four figures for an FG mag, IMO it was genuinely rare.
WW2 MP44 magazines are not difficult to find.

Anyway, they don't seem to be increasing in price since I created this post three years ago, which answers my own query.
W

Rember right after the wall fell and Sarco got in MP40 and MP44 parts kits. IIRC, the MP40 kits were $350 and the MP44 ones were $475. Spare MP44 magazines were $50. I remember thinking that someday, they were going to be way more than $50. Unfortunately, I didn't have money falling out of my arse!
W